WHAT’S IN A NAME?

The former Wesleyan Chapel and the adjoining Sunday school can be found in Hampton Road, off Argyle Road and Derby Road in Newbury.

This area is called ‘The City’, it has several groups of historic Almshouses, the oldest believed to be dating back to the 16th century. Although this area is one of the most beautiful parts of town, it is still relatively unknown.

So, the name speaks for itself really, through bringing ‘Art’ into ‘The City’, we would like to bring the community together. 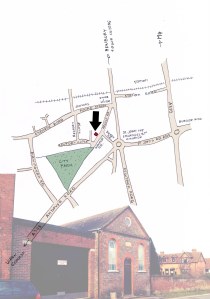